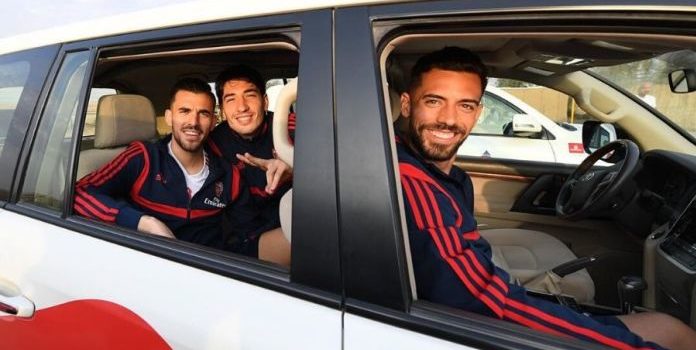 It was priceless to see an Arsenal squad enjoying and diving in the Dubai desert safari’s unique cultural experience. At the end of their winter training, they continued by getting the amazing enjoyment in the desert with the courtesy of Arabian adventures and Emirates. This was their final winter break, so they decided to enjoy the warm-weather training camp in the Dunes of Dubai. After that, they are heading towards England before that desert provided them all the warmth. Players went to the dunes in 4x4s and then spotted riding a camel.

Getting Catered With Arab Hospitality

Mikel Arteta is providing hospitality to the Arsenal for four days in the United Arab Emirates. They were pretty impressed with their conditions for the training and posted about their mini pre-season. These players wish to stay united wherever they go as a team and do not lack to showcase their bond in the desert safari. They were totally in awe of the safari experience in the desert, Arab Cuisine, and traditional shows and performances.

Even Emerick Aubameyang and Alexandre Lacazette posted their picture of barding a camel with a caption- “Juts two Goats and a camel’. Seriously, it was a funny caption describing their second part of the adventure. More pictures were captioned as-, “ An amazing night of team building and cultural experience!” Still, they declared in an interview that they were here to work; it is not a holiday. After all, it is the last day of the training, and after such sessions, everyone requires some fun.

Over the training pitch, players got all the practice sessions, and otherwise, they enjoyed this time in the UAE. He also mentioned the availability of various games to keep them recharged and have great team bonding. Positivity and happiness are two key aspects Bellerin talked about while sharing experiences of being in the UAE. And, also considered this time as an opportunity to be together with your fellow workers and players. He thanked the Emirates for such amazing arrangements and amenities for them all. Also, he mentioned how great were the arrangements when he came last time and was going through rehab. He felt better at that time, and according to him, it is great to train in such favorable weather of the United Arab Emirates. “Even though it was not at all a holiday, but they made us enjoy our time,” he added.

April 1, 2021/822
A Comprehensive Guide To Plan The Desert Safari In Dubai

September 24, 2020/974
Keep Your Expectations High With Experience The Desert Safari In Dubai
You May Interested

Desert Safari UAE is one of the reputed Tourism Company in Dubai country UAE. We are offer the all type of Desert Safari Dubai.Desert Safari Dubai is a young and thrilling destination management company based in UAE, the regional hub of Globe Class tourism.
783H+CH Dubai Port Saeed Road Deira - Dubai,,
Phone: +971 55 735 5443